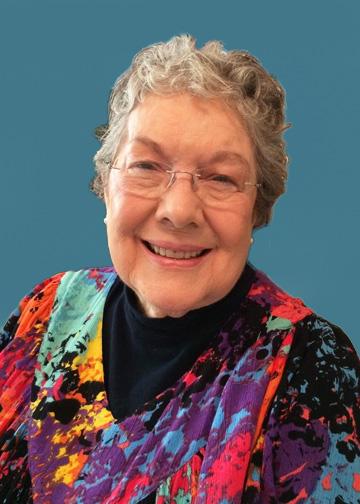 Emily Carolyn Koonce Davis died Tuesday, February 2, 2021, in Austin, Texas, with family by her side.  She was born January 20, 1931 in Haskell, Texas to W. Wayne Koonce and Marylee Pinkerton Koonce.  Carolyn (don't call her Emily!) attended school in Abernathy and Galveston (skipping 7th grade) before graduating from Woodrow Wilson High in Dallas, and moving to Lubbock to attend Texas Tech.  In the fall of 1948, while on a double blind date (not with each other), she met the love of her life, Tommy, and they were married on Valentine's Day, 1949, at First Christian Church in Lubbock.

Carolyn valued married life and devoted herself to home and family, foremost. Upon arriving in Slaton, she told us, she proudly introduced herself around town as Mrs.Tommy Davis. From the beginning, her faith and her church were central in her life and she actively participated in First Christian (Disciples of Christ) in Slaton, and later, after raising the kids, joined First Christian in Lubbock. Up until her move to Austin two years ago, following the death of Tommy, one of her greatest joys was being able to attend church every Sunday.  She was famous for greeting everyone and not leaving until all had been spoken to, encouraged and hugged---always the last to leave the church.  She served in many areas---sang in the choir, was youth leader, church camp counselor, Sunday School teacher, deacon, elder (a position she took very seriously and with honor and dedication), CWF member (being named Woman of the Year in 1988), as well as serving on many church boards. She felt called to visit the sick and grieving, taking flowers and her famous apricot cobbler to comfort them. Carolyn studied the Bible in great depth and had an amazing understanding and profound faith that not only guided her through life's challenges, joys and sorrows, but was an example to the many lives she touched.

Carolyn was a charter member of the Athenian Study Club in Slaton, holding several positions of leadership as well as serving on the Chamber of Commerce (being named Woman of the Year in 1964), and participated in PTA and Scouts throughout the children's school years.   She was an avid supporter of all the kid's athletics, (although admitting to not really understanding competition), and rarely missed a game or event.  She taught kindergarten in her home for several years and later was a Beauti-Control skin-care consultant.

Carolyn was a dedicated and loving wife and Mother.  She and Tommy showed early on the importance of taking care of those in need---they devoted their endless time and energy to raising four children and giving Dan, born with cystic fibrosis, the happiest and most normal life possible.  It was primarily their excellent care that Dan beat his early prognosis of "not making it to school age" and lived an active, productive life for 24 years.  Later, she spent much time loving and lending a helping hand with the grandkids, and especially with Brooke, who required constant care during her 13 years.

The family enjoyed spending summers at Surfside, to boost Dan's health, with the bonus of turning us all into beach-lovers---we had many fun-filled days with extended family and friends. Mother was adventurous, fun-loving and always the life of the party and ready to entertain.  She, along with our Dad, loved planning every inch of our home they built together, decorating it and making the backyard into an oasis with the addition of a pool.  She had an eye for beauty and designed and constantly worked on the landscaping.  She threw parties, celebrated all occasions, with flair, and especially enjoyed the pool with family, friends and neighbors.

In 1948, while working in a downtown Lubbock drug store, some the regulars talked Mother into running for the Miss Lubbock contest.  After talking it over with her Mom, who encouraged her, saying it would be a fun experience, she gave in and went for it.  To her amazement, she won and proudly represented the city of Lubbock. She loved music and enjoyed singing, especially the song of her talent, "I'm Confessing", up until her last days.

In her late sixties, Mother became something of a miracle, according to her doctors and many others.  She sustained a near fatal brain aneurysm, had every complication imaginable, had to endure months of surgery, procedures, treatment and rehab, completely relearning everything and beating the odds to return to her independent self. She entertained all her doctors, nurses and therapists and encouraged other patients along the way with her winning upbeat personality (she never met a stranger!).  When we would reminisce about those long uncertain months, she'd be incredulous, asking "Did all that really happen?---I don't remember any of it!"  We will alway be thankful and never forget First Christian Lubbock and the many friends who showed love and support that helped us through the challenges of this time.  We have been very fortunate to have her for twenty plus more years, even as she declined and life became more difficult, her positive bright attitude and spirit always came shining through.  She was, as Pastor Paul says, "easy to love!"

We will be forever grateful to Mother (and Daddy's) "third daughter", Dr. Cathy Malouf of Lubbock, who provided constant excellent care which enabled her to stay in her home in Slaton until Tommy's death. Dr. Malouf took on the challenge of continuing to care for her from a distance after she moved to Austin, going to great difficult lengths at times, to keep her as healthy as possible. We will never forget her immeasurable kindnesses (even Sonic ice cream runs, birthday parties and chauffeuring drives around Slaton), patience and expertise which kept Mother (and Daddy) going---she was not only a one of a kind healer, but a treasured friend as well. Our gratitude also goes to Doris Whaley, DeLena Delgado, Josie Baca, Tiffany Hancock and April Dabila---all loving caregivers through her last years in Slaton.  We're thankful to the outstanding staff at Southern Hospitality, Austin, for their tender compassionate care during her last months, always going the extra mile to keep Mother comfortable and safe, under trying Covid circumstances.

Due to Covid concerns, a family led memorial service will be announced later, and will be held at First Christian Church in Lubbock, with burial in Englewood Cemetery in Slaton, Texas.

A service summary is not available

Plant a tree in memory of Emily Carolyn Koonce Davis

A Memorial Tree was ordered in memory of Emily Carolyn Koonce Davis.  Plant a Tree

John and Nancy Davis... With Sympathy

John and Nancy Davis... With Sympathy

A Memorial Tree was ordered in memory of Emily Carolyn Koonce Davis by John and Nancy Davis... With Sympathy .  Plant a Tree

A beautiful testament for a very beautiful woman inside and out.

Marilyn and Jan I’m so sorry for the loss of your beautiful mom. She always had a smile on her face when I cleaned for your parents. I will never forget your parents and their anniversary
Y’all are in my prayers.
Jennifer Johnston

Plant a tree in memory of Emily Carolyn Koonce Davis